A pearl is a hard, glistening object produced within the soft tissue (specifically the mantle) of a living shelled mollusk or another animal, such as fossil conulariids. Just like the shell of a mollusk, a pearl is composed of calcium carbonate (mainly aragonite or a mixture of aragonite and calcite)[3] in minute crystalline form, which has deposited in concentric layers. The ideal pearl is perfectly round and smooth, but many other shapes, known as baroque pearls, can occur. The finest quality of natural pearls have been highly valued as gemstones and objects of beauty for many centuries. Because of this, pearl has become a metaphor for something rare, fine, admirable and valuable.

The most valuable pearls occur spontaneously in the wild, but are extremely rare. These wild pearls are referred to as natural pearls. Cultured or farmed pearls from pearl oysters and freshwater mussels make up the majority of those currently sold. Imitation pearls are also widely sold in inexpensive jewelry, but the quality of their iridescence is usually very poor and is easily distinguished from that of genuine pearls. Pearls have been harvested and cultivated primarily for use in jewelry, but in the past were also used to adorn clothing. They have also been crushed and used in cosmetics, medicines and paint formulations.

Whether wild or cultured, gem-quality pearls are almost always nacreous and iridescent, like the interior of the shell that produces them. However, almost all species of shelled mollusks are capable of producing pearls (technically “calcareous concretions”) of lesser shine or less spherical shape. Although these may also be legitimately referred to as “pearls” by gemological labs and also under U.S. Federal Trade Commission rules,[4] and are formed in the same way, most of them have no value except as curiosities.

Freshwater and saltwater pearls may sometimes look quite similar, but they come from different sources.

Freshwater pearls form in various species of freshwater mussels, family Unionidae, which live in lakes, rivers, ponds and other bodies of fresh water. These freshwater pearl mussels occur not only in hotter climates, but also in colder more temperate areas such as Scotland (where they are protected under law). Most freshwater cultured pearls sold today come from China. 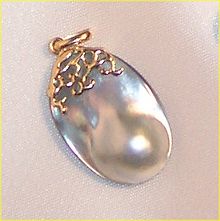 A blister pearl, a half-sphere, formed flush against the shell of the pearl oyster.

Keshi pearls, although they often occur by chance, are not considered natural. They are a byproduct of the culturing process, and hence do not happen without human intervention. They are quite small, typically only a few millimeters. Keshi pearls are produced by many different types of marine mollusks and freshwater mussels in China. Keshi pearls are actually a mistake in the cultured pearl seeding process. In seeding the cultured pearl, a piece of mantle muscle from a sacrificed oyster is placed with a bead of mother of pearl within the oyster. If the piece of mantle should slip off the bead, a pearl forms of baroque shape about the mantle piece which is entirely nacre. Therefore, a Keshi pearl could be considered superior to cultured pearls with a mother of pearl bead center. In the cultured pearl industry, the resources used to create a mistaken all nacre baroque pearl is a drain on the production of round cultured pearls. Therefore, they are trying to improve culturing technique so that keshi pearls do not occur. All nacre pearls may one day be limited to natural found pearls.Today many “keshi” pearls are actually intentional, with post-harvest shells returned to the water to regenerate a pearl in the existing pearl sac.

Tahitian pearls, frequently referred to as black pearls, are highly valued because of their rarity; the culturing process for them dictates a smaller volume output and they can never be mass-produced because, in common with most sea pearls, the oyster can only be nucleated with one pearl at a time, while freshwater mussels are capable of multiple pearl implants. Before the days of cultured pearls, black pearls were rare and highly valued for the simple reason that white pearl oysters rarely produced naturally black pearls, and black pearl oysters rarely produced any natural pearls at all.

Black pearls are very rarely black: they are usually shades of green, purple, aubergine, blue, grey, silver or peacock (a mix of several shades, like a peacock’s feather).

The correct definition of a South Sea pearl – as described by CIBJO and GIA – is a pearl produced by the Pinctada maxima pearl oyster. South Sea pearls are the color of their host Pinctada maxima oyster – and can be white, silver, pink, gold, cream, and any combination of these basic colors, including overtones of the various colors of the rainbow displayed in the pearl nacre of the oyster shell itself.

South Sea pearls are the largest and rarest of the cultured pearls – making them the most valuable. Prized for their exquisitely beautiful ‘orient‘ or lustre, South Sea pearls are now farmed in various parts of the world where the Pinctada maxima oysters can be found, with the finest South Sea pearls being produced by Paspaley along the remote coastline of North-Western Australia. White and silver colored South Sea pearls tend to come from the Broome area of Australia, while golden colored ones are more prevalent in the Philippines and Indonesia.